2020 was a hectic year for everyone, including me. COVID turned up suddenly in March and morphed the ‘Normal’ into something more blatantly depressing, sad, and alienating. The USA, where I live, still hasn’t gone back to ‘Normal’, to the shame of practically everyone living in this country.

COVID is quite a heavy topic, so I’ll just conclude here.

If it was just COVID, then I might’ve made a ton of progress on A Frail Qubit! However, I did join a mod team early on in 2020 that came to define my year - The New Order: Last Days of Europe. (My name is Battlefrog in the Credits and on the Workshop page!)

It’s been an absolute blast to be on a massive team, working together to achieve a uniformly held vision. It’s quite different from creating a game by yourself in your spare time; I’d recommend joining a mod team sometime if you are a budding hobby indie developer.

With regards to A Frail Qubit, however, being on the mod team has really sucked a whole lot of spare time towards it and away from A Frail Qubit. Recently, I realized how much this was the case, and I’ve begun to take a little bit of time and put it towards A Frail Qubit again. It’s been a nice change of pace. 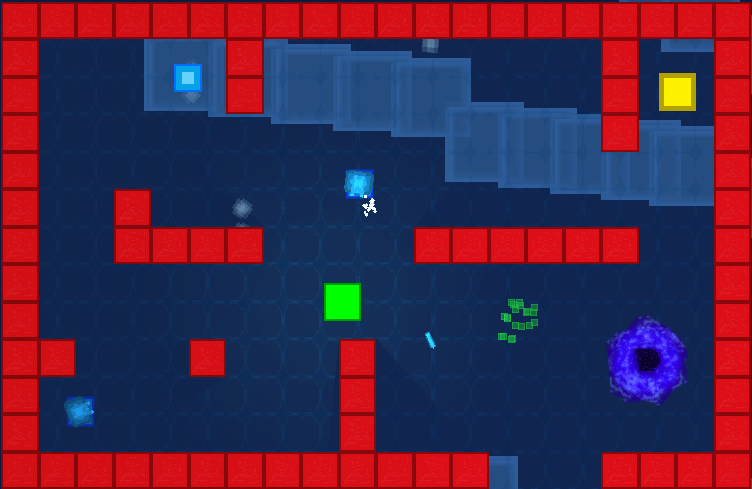 Shooters are bastards: They will shoot at you, and they are a total pain in the ass about it. The best part about them, though? They are actually fun to go against.

Dodging the bullets of the Shooters requires a quick reaction time and an even quicker ability to dodge the projectiles! I mention this further down this devlog, but Shooters have become my favorite part of A Frail Qubit, so much so that their dynamic nature has inspired me to facelift the beginning of the game. 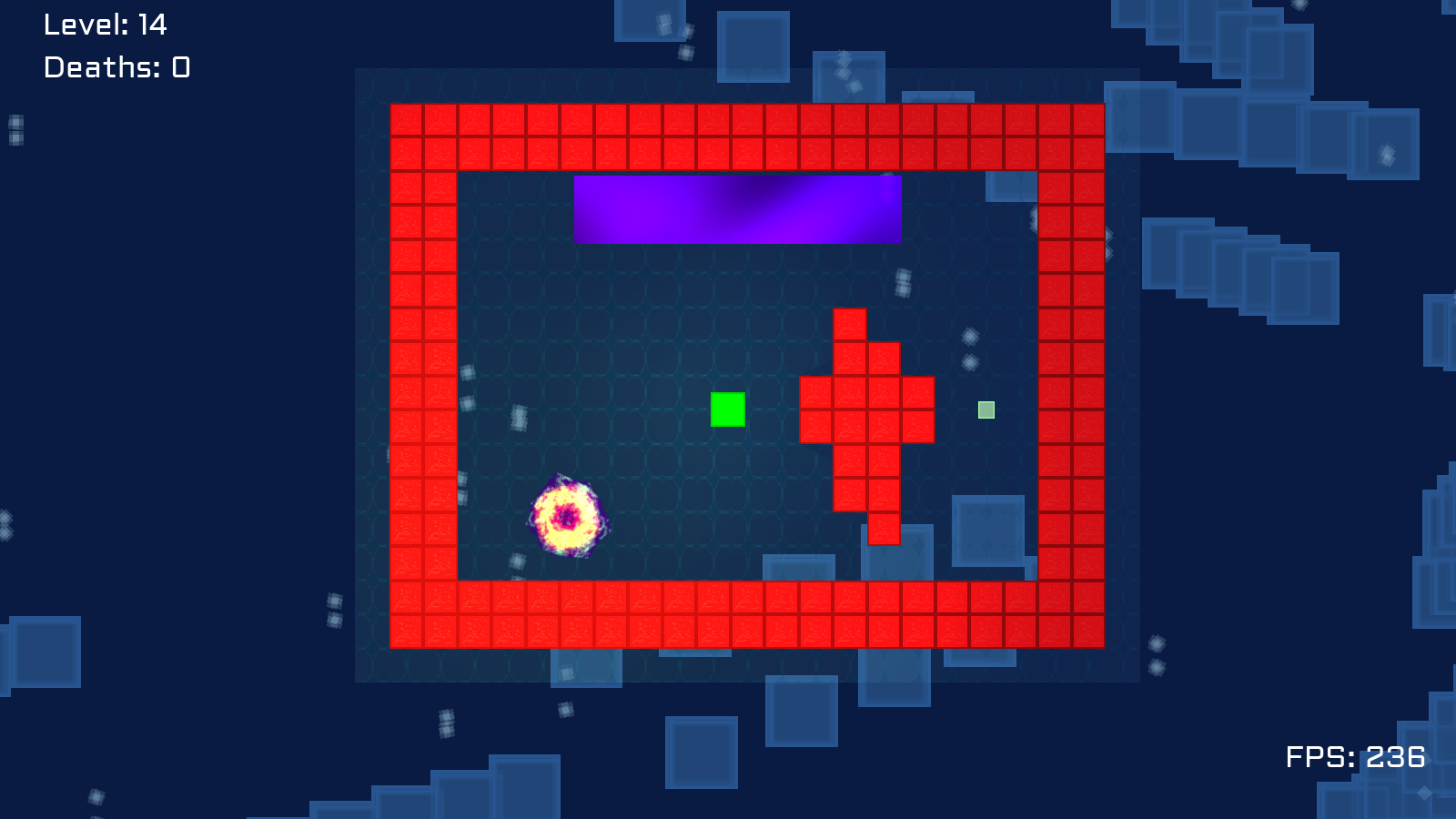 Distortions are a new (and welcome) addition to A Frail Qubit this upcoming Alpha. While the looks as of this devlog certainly aren’t final, the functionality is for the most part set in stone. Distortions are sort of ‘Hubs’ for the Player to relax, learn a new Powerup, and interact with the mysterous outside world. 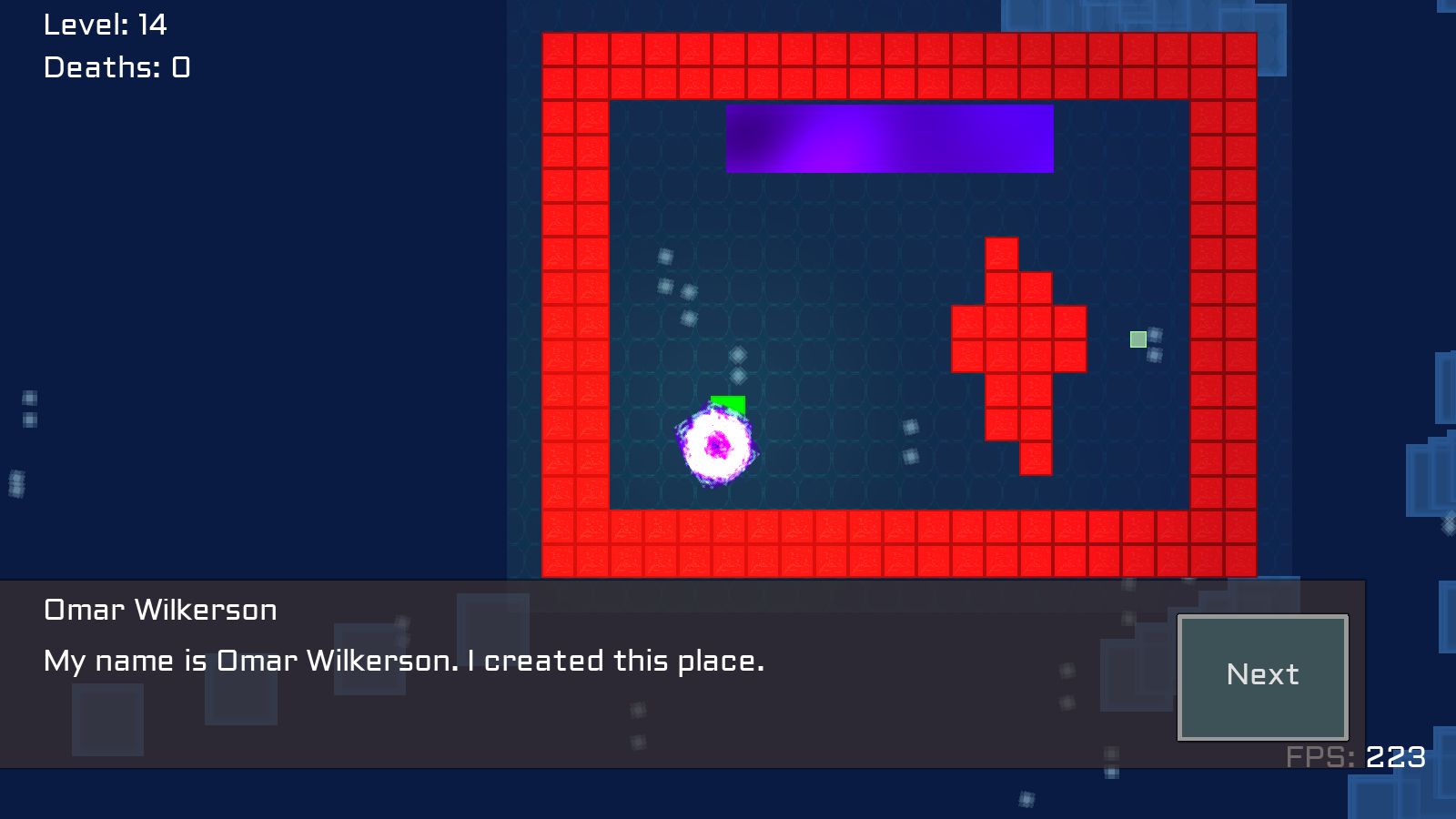 Yes, a Story will be coming to A Frail Qubit. I mentioned this previously as the main reason for adding Distortions, and here is the vehicle for telling that story. While it doesn’t look pretty now, the basic functionality is all working. You can advance the dialogue, see who is talking, and get to know the character on the other side of the data.

Over the coming weeks I’ll be adding visual polish to this, as well as showcasing some of the characters you’ll be able to get to know over the story of A Frail Qubit.

Powerups, while optional, will certainly help you out a lot. The only currently implemented Powerup is a Speedup Powerup, which gives you a quick boost to your speed.

I don’t want to make these too powerful (You could miss out on a necessary item very easily!) or too weak (What’s the point of going in a Distortion for a shit powerup?). This’ll be a fine line to cross, and I’m not too sure which outcome I’d rather want.

The Menus look a lot better, at least in my opinion. Here are some examples of more polished menus. 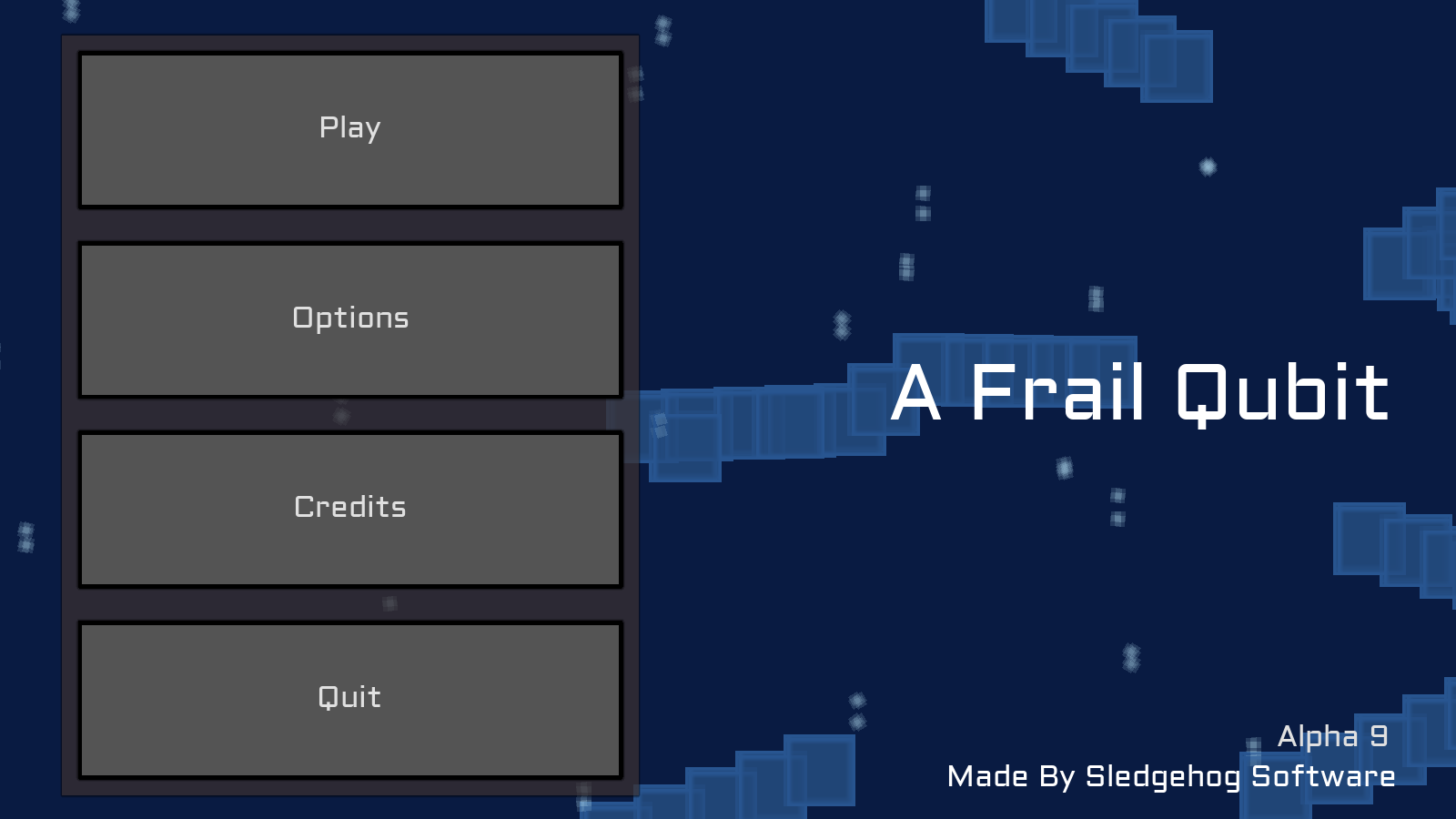 The Main Menu has seen the temporary image removed, and replaced with a bigger title! While not a big change, the image never felt correct. Origionally I was going to add a video montage of various moments throughout the game, but as time went on I kept pushing back on creating that video, until I realized a better solution would be to remove the temporary image. Perhaps I still will add the video, but later down the line once the Graphics have been finalized. 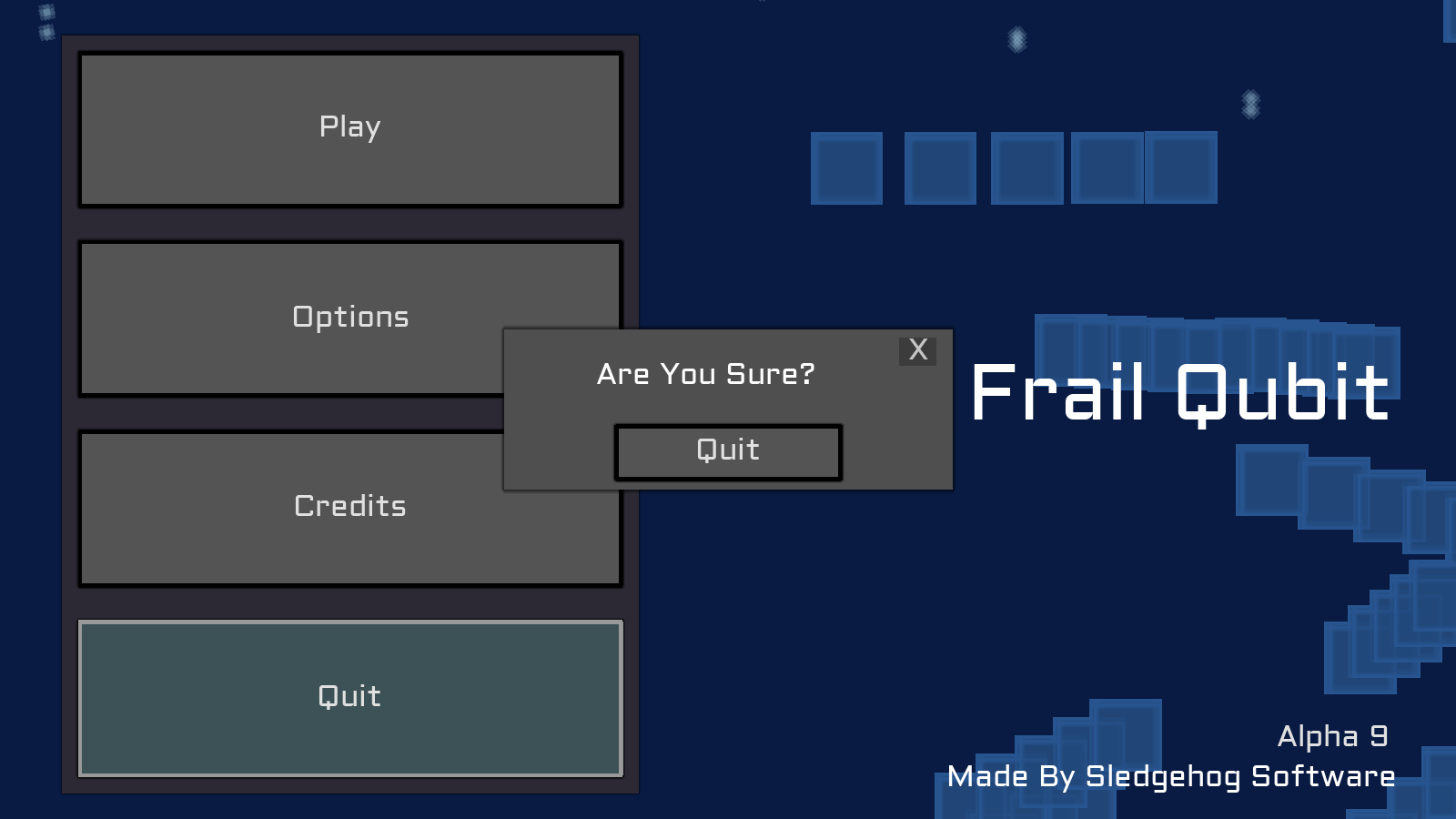 There’s even a Quit confirmation… 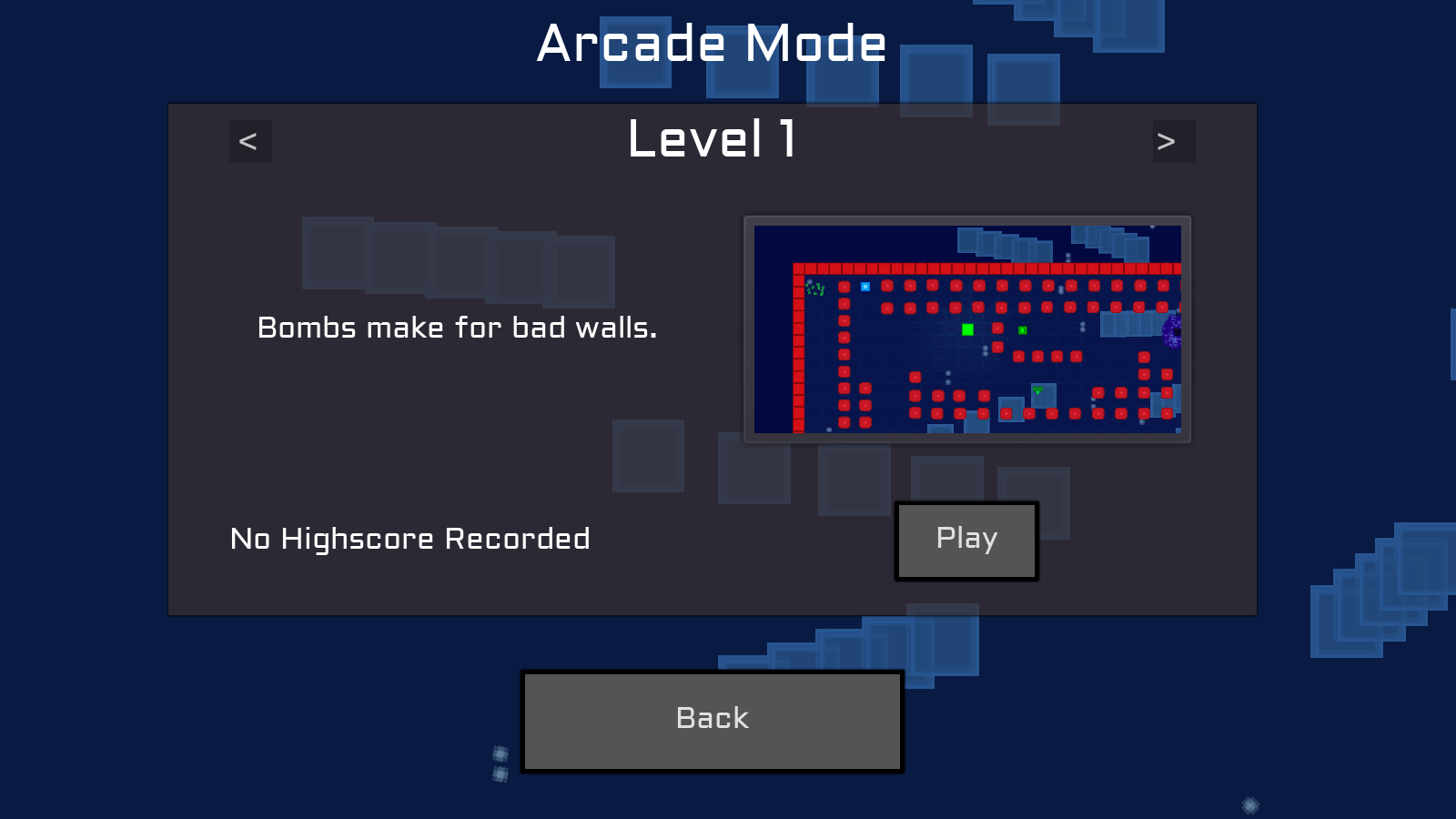 While the Arcade Mode menu hasn’t been changed too much, the ugly arrows have been replaced with a font-based solution, and the Level Preview images have been given much needed depth. 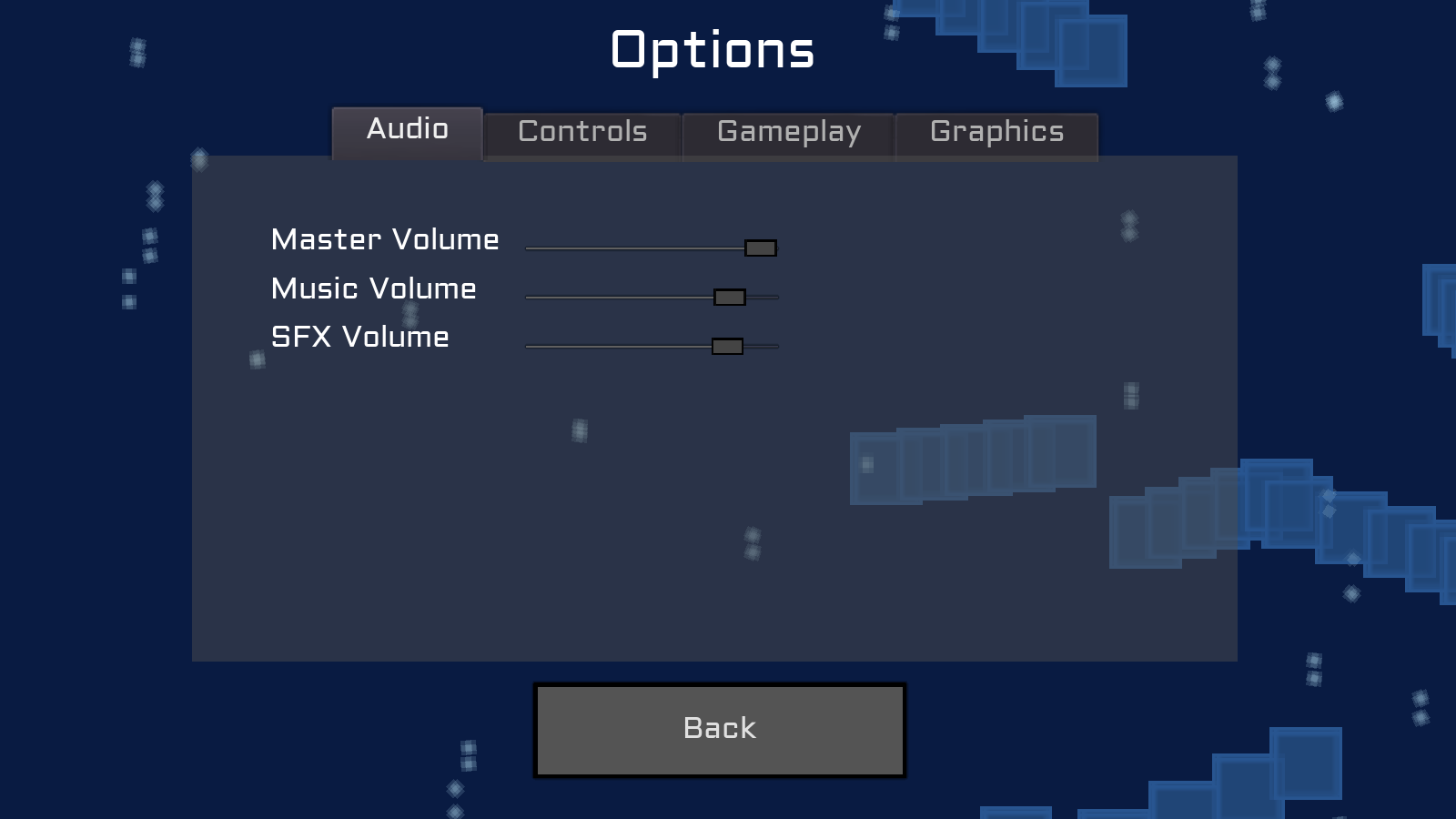 You’ll see that the infamous Slider’s look has changed once again. Finally, it looks normal.

The main game font is now Aldrich, completely and shamelessly copied from TNO. What can I say, it’s a nice font! 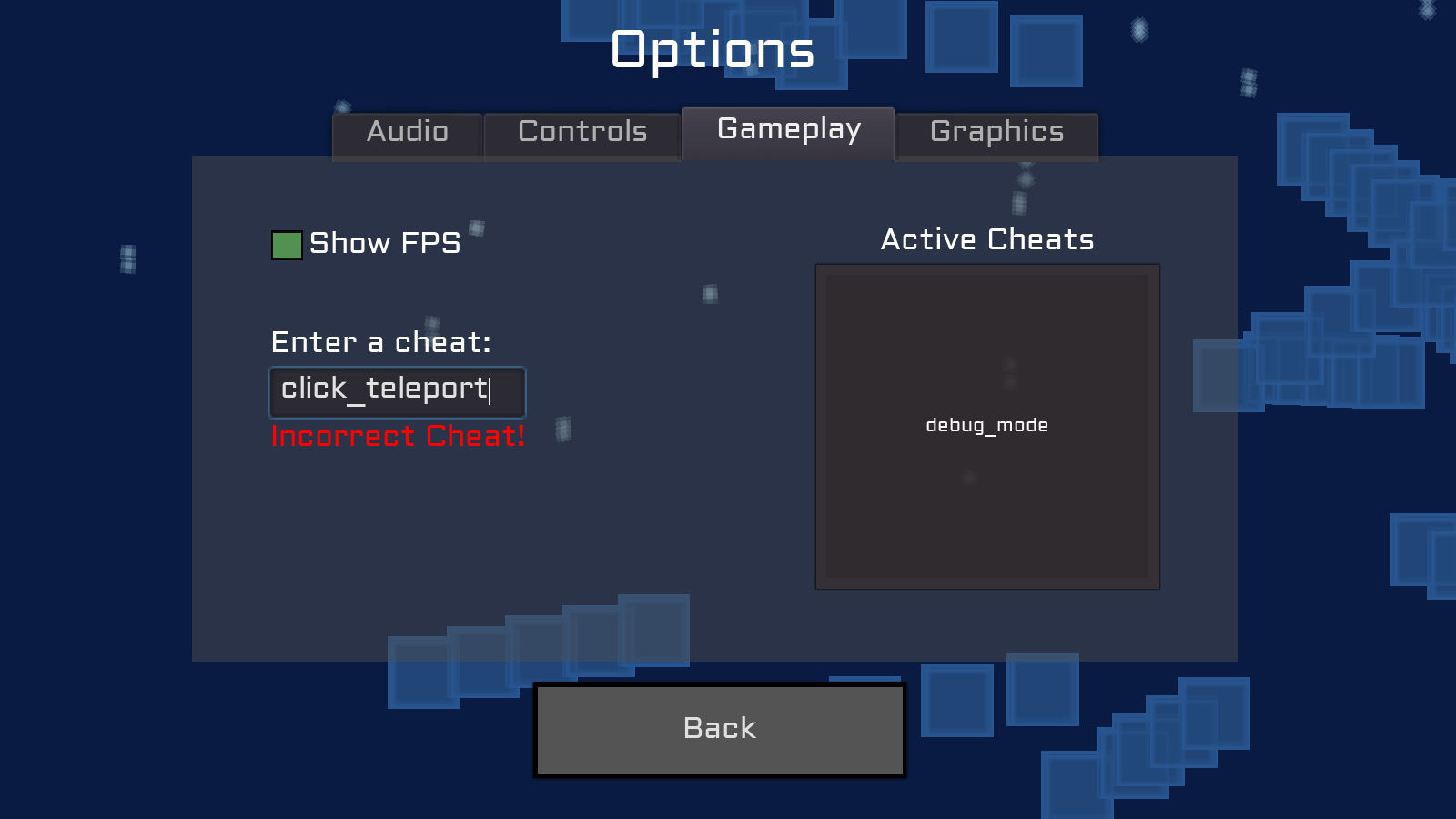 Nobody other than me knew about it, but there is an old ‘click_teleport’ cheat in previous Alphas that did exactly what you’d expect it to. It was handy for getting into nice screenshottable positions without having to spend a ton of time getting there without blowing yourself up or dying.

Sadly, with the new Camera system the cheat has been broken. With the Dialogue Player needing a mouse input and the mouse clicks all teleporting the Player around to God Knows Where, I decided to remove the cheat; It was easier removing it than trying to fix it.

One thing I’ve realized recently is that the early game of A Frail Qubit is stained by staticness. Static games are boring. Games are best when they are dynamic systems, with the Player sending shockwaves through a relatively calm world.

To make A Frail Qubit become a dynamic game, I’ve decided to do a couple of things.

This is still in the ‘early-idea’ stage at the moment, but I’m thinking of adding some sort of hostile mob to A Frail Qubit. This mob would be slightly random in nature, and be called something like ‘Pricks’. ‘Pricks’ would be little creatures that run around and, when a near direct line of sight with the Player is established, aggros and attempts to Suicide Bomb the Player. There would occasionally be Spawners of these creatures, and they could also interact with the Shooter. Perhaps they are a higher priority for Shooters to shoot?

This mob would of course be annoying, but also would be a great addition to the early, static levels. Keeping the Player on their toes is something that all games must do, while in A Frail Qubit the Player is solidly on their feet.

Shooters have been such a crucial change to the game, so much so that I dread to play the constant static levels before them. Currently, there’s quite a lot of levels before them, as Shooters are introduced in the latter-half of content for Alpha 9. I’d like to bring that closer to 20 or 25, though that number certainly isn’t final.